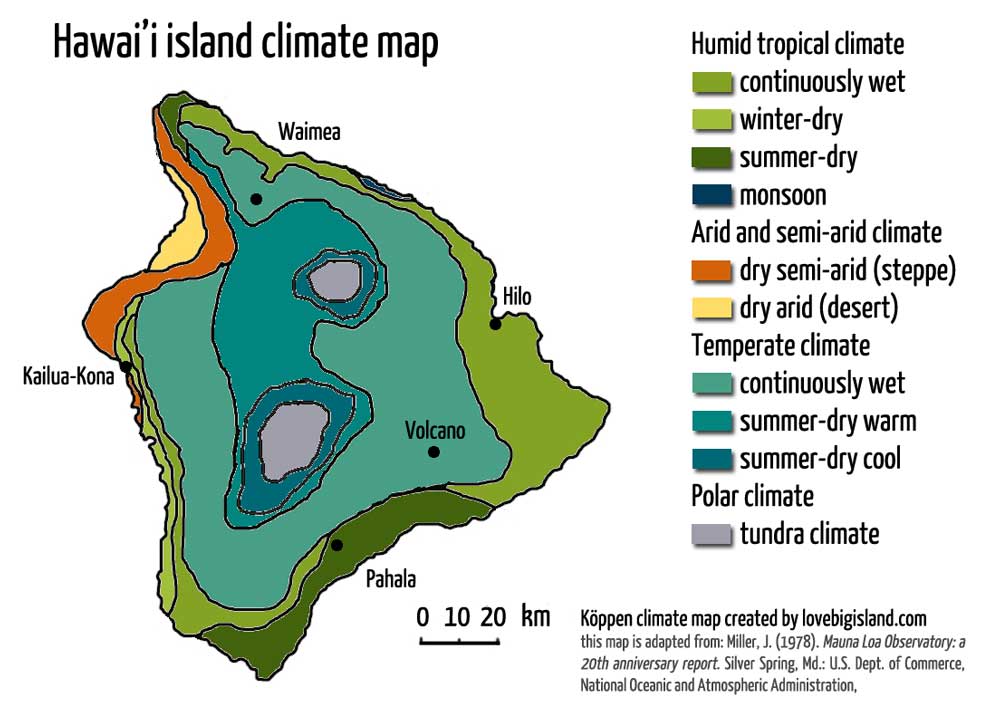 The 8 climate zones on the Big Island of Hawaii

Hawaii is one of the most ecologically diverse places in the world, and you can find many extreme climates on the Big Island. This makes Hawaii even more interesting and it underlines one of the often repeated false quotes about Hawaii:

This is an extraordinary feat for such a “small” (4,028 square miles surface) Big Island and would allow you to see all those different climates in one day.

This sounds like fun right, but is it also true? How many climate zones are there actually in the world? And how many of those can you find on the Big Island?

There are 8 climate zones on the Big Island 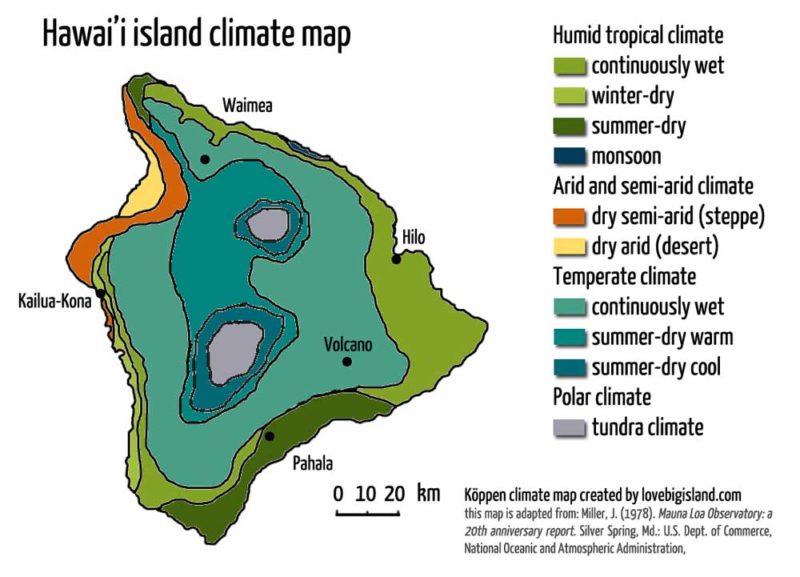 The map above is based on work from J. Jurvik in the 20th-anniversary report for the Mauna Loa observatory [source]. It lists 10 different climate zones, but only 8 of those are distinct ones if classified according to the Köppen system. Temperate “summer dry” and “summer cool” both belong to the temperate dry climate. Tropical “winter dry” and “summer dry” both belong to the tropical dry climate.

Which climate zones can you not find in Hawaii?

There are only five climate zones that you can not find on the Big Island of Hawaii. These are:

You can read more about both these missing climate zones, and the 8 climate zones that can be found on Hawaii, below.

The 13 climate zones of the world

You can find all five major climate zones and the 13 sub-zones they are split into below. We also list whether this climate zone can be found in Hawaii as well as the color that identifies it on our climate map.

In these climates all months have average temperatures greater than 64° F (18° C) and an annual precipitation is greater than 1500 mm. There are 3 sub-zones in this climate types and their designation is based on the seasonal distribution of rainfall:

In this climate the annual evaporation exceeds annual precipitation. The two main subclasses refer to the dominant vegetation types: steppe and desert.

Continental (cold) climate (not in Hawaii)

Continental climates have warm to cool summers and cold winters. The average temperature of the warmest month is greater than 50° F (10° C), while the coldest month is less than 27° F (-3° C). The main subdivisions are the same as those for the temperate climate:

Polar climates are characterized by average temperatures below 50° F (10° C)  during every month of the year. This climate can be split into two sub-climates:

Weather on the Big Island

So what does this mean for your visit to the Big Island? Good news: you will find good warm weather year round. It might be a bit rainy if you are spending time on the east coast or get cool at night if you are staying at high elevation, but that’s it.

The conclusion of this article that there are 8 out of the total 13 climate zones on the Big Island is based on the most common use of Köppen climate classification system. This is the most widely used and understood classification, but by far not the only one. The Köppen system itself has also changed over time (Wilcock et al. 1968 ).