Did you know that a whale is more closely related to a giraffe than to a fish? This guide to whale watching gives you a broad popular scientific background on humpback whales and great whale watching (and listening!) tips.

Check out our tips and tricks to see whales on Hawaii if you are interested in getting to know the humpback whales personally.

This guide to whale watching gives you a broad popular scientific background on the humpback whale and great whale watching (and listening!) tips. You will find out:

A quick reminder: whale season in Hawaii is between November and May. Check out our tips and tricks to see whales on Hawaii if you are interested in learning how to see and/or listen to the whales yourself, or our 6 great whale watching tips to make the best our of any whale watching cruise.

Humpback Whales in a (50 ft) nutshell

Size comparison of an average human and a humpback whale

Humpback whales are regular visitors to the Hawaiian islands. Females are a bit larger than the males, but all adults measure between 40 and 50 ft and weigh between 25 and 40 tons.

These immense animals feed on very small animals: krill (small shrimp-like crustaceans) and various kinds of small fish. Humpback whales eat up to 1.5 tons of food a day (!), and they hunt using a scaled up water filtering device. The whales swim with an open mouth through a school of prey and then push out the water filtering their food using plated grooves in their mouth: baleens. They are social hunters and have a wide range of techniques, with as most interesting the “bubble net”.

A group of whales creates this net by swimming below a group of prey in a shrinking circle while blowing bubbles. This pushes their prey in a smaller and smaller cylinder and if the circle is small enough the whales swim through it harvesting all their food.

The humpback whale has a distinctive body shape, with unusually long pectoral fins and a knobbly head.  The shape and color pattern on the humpback whale’s dorsal fin and flukes (tail) are as individual in each animal as are fingerprints in humans. The males are known to sing complex songs.

Humpback whales cannot breathe under water, but they can hold their breath very well. They resurface every 7 – 20 minutes to take a breath of air, and while they are at the surface they often perform some acrobatic stunts that are possibly used to communicate. In total, they spend about 10% of their time on the surface.

Why and when do Humpback Whales migrate?

The distance record for humpback whale migration is  25.000 km / 16.000 mi for one year! The north pacific humpback whales take it a bit more easy, and cover “only”  6000 miles a year. The biggest reason for this migration is food, but there are many other factors at play such as water temperature, salinity and the presence of predators. In general, most food can be found in the polar waters, but this food also attracts large predators such as killer whales that can prey on young whales. To keep their young (calves) safe during their first (most vulnerable) months the whales migrate to food-poor sub-tropical waters. A good way to remember this is “summer-feeding, winter-breeding”.

Below you can see the migration patterns for the northern pacific humpback whales.  Notice the two smaller winter breeding areas close to Japan and Mexico, and the immense popularity of the Hawaiian Islands!

Migration Patterns for north pacific humpback whales. 60% of the population spends their winter around Hawaii! The data for this graph was gathered for the SPLASH (Structures of Populations -Levels of Abundance -Status of Humpbacks) project, image credits: NOAA.

Humpback Whales on Hawaii: Where and When can you find them?

Between 10.000 and 12.000 humpback whales spend their winter around Hawaii. You can easily spot these whales if they are close (± a few miles) to the shore by some of their acrobatic stunts, such as slapping the water with their tail or blowing water out of their blowhole.

Some times and places are better than other for whale watching in Hawaii. For example, if you are visiting Hawaii outside whale season (which is between November and May) your chances of seeing a whale are very slim.

During whale season, you can see whales from every coastline in Hawaii. Just like us, the humpback whales like some parts of Hawaii more than other parts, but there really isn’t a “whale-free” part of Hawaii.

Below you can see the results of an aerial survey that was held between 1993 and 2003 by Dr. Joe Mobley from the University of Hilo. Whales have been spotted all around Hawaii: from a few whales in the yellow areas to many in the red “hot-spots”.

If you are on the Big Island, this means that you will have most chances of seeing whales in the north Kona, and north and south Kohala districts.  If you are really passionate about seeing many whales, you can think about camping in Waipi’o or Pololu valley, of organizing a sunset picnic in Holoholokai Beach Park. Be advised that to go camping you need to request a camping permit. 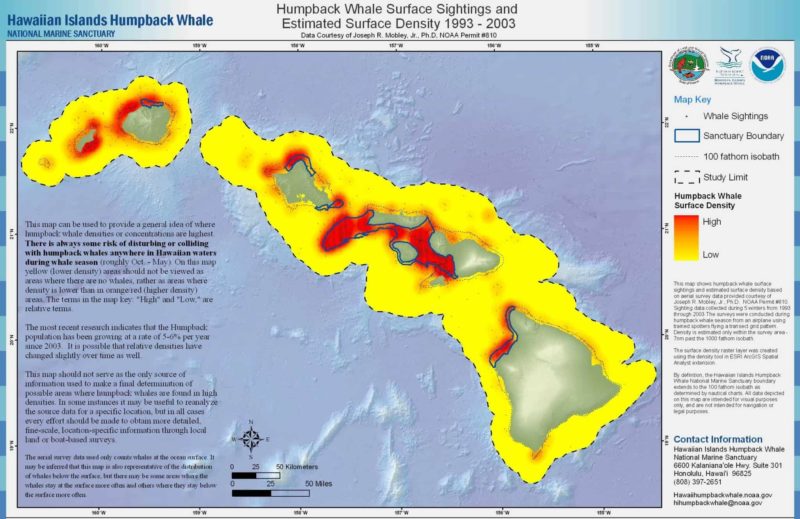 This map shows where you can best see whales on Hawaii. The red zones are the best spots to see whales, the yellow zones also have whale sightings but relatively less. Click on the image for a large version. The aerial survey data was collected by Dr. Joe Mobley from UH during 1993 – 2003 and the density surface was developed by the Hawaiian Islands Humpback Whale National Marine Sanctuary.

Humpback whales are active and acrobatic whales, which is the main reason why it is so easy to find them and so much fun to watch them. It is possible that the whales perform these stunts just for fun, but probably they are important for communication between humpbacks. Some common behaviors from the humpback whales around Hawaii are:

These are the most common “stunts” the humpback whales perform. Image credits: NOAA, Suzanne Canja and Doug Perrine

These are all spectacular stunts to see, but acrobatics are not the only thing these humpback whales have to offer. Perhaps the most interesting part of their behavior is the singing!

Humpback whales are the aquatic version of opera singers. Scientists have discovered that humpback whales sing long and complex “songs”, that typically last between 10 and 20 minutes and that can be repeated for hours.

All whales in the North American Atlantic population sing the same song, but whales from other population sing uniquely different songs, and each of these songs changes a little bit every year. It is like they each have their own hit chart! Only the male whales sing and because of this it is thought that the songs might be part of mating rituals.

I have saved the best for last: Did you know that you can also listen to live performances of these songs if you are in Hawaii during whale season? Sound carries far under water, and you can hear these songs even if you are a couple of miles away from singing whales.

All you need to do is get in and under water if you see whales close to the coast, clear your ears (close your nose with your fingers and blow it at the same time till they ‘pop’), float, and listen carefully. You can do this of course also while snorkeling. You can find more detailed instructions in our lovebigisland whale watching guide.

Are you curious what whales sound like? You can listen to a sound fragment of a whale song recorded by the NOAA. You can find the file here or listen to it directly below. Don’t they sound like underwater cows?

Whales have had a difficult time during the last century because of their value to hunters and are still in need of protection. Luckily, it is very easy to help protect them. Because (unfortunately) economic value is still the biggest motivator if it comes to preservation efforts, joining a responsible whale watching tour will, in the long run, help these majestic animals survive. Whale watching tours already contribute approximately $ 20 million in total revenues a year to the state, and as tourism increases this number will rise.

Another way to show that you care is by adopting a whale. You can also adopt a whale for a friend or loved one, so check out their site!

Did you know that whales are no close relatives to fish? Humpback whales are a species of baleen whales, which together with all whales are part of the order Cetacea (together with dolphins and porpoises). The ancestors of these Cetacea (and of all whales) used to live on land and took to the water less than 50 million years ago. Their closest relative that is still alive is the Hippo, other far relatives are the giraffe and the pig!

There have been even closer relatives to today’s whales, and the closest of such relatives that we know of is the Indohyus (Greek for Indian Pig). This animal was a fox-shaped dear that lived about 48 million years ago [source]. Below you can see the family tree of the Humpback Whale as determined by Gatesy and Spaulding in 2009 [1]. 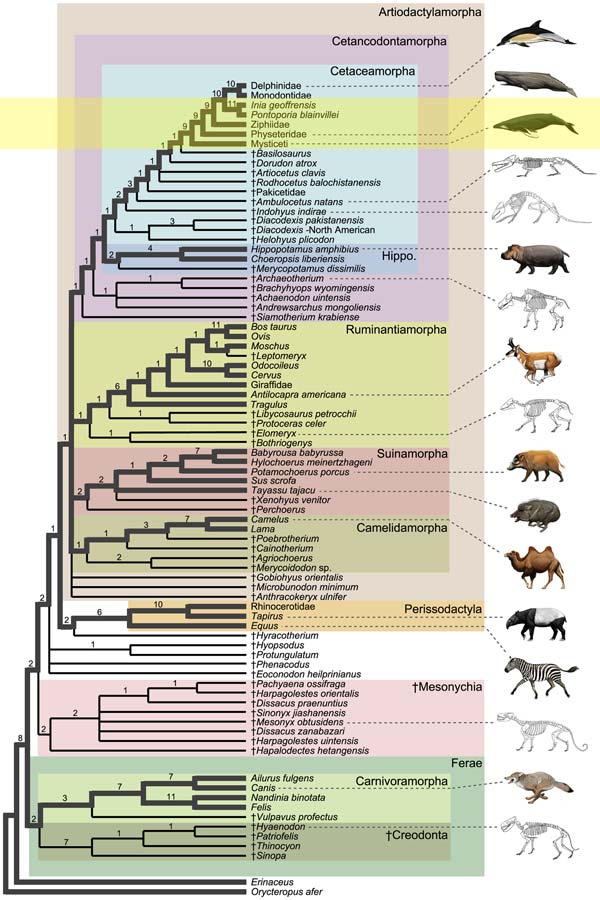